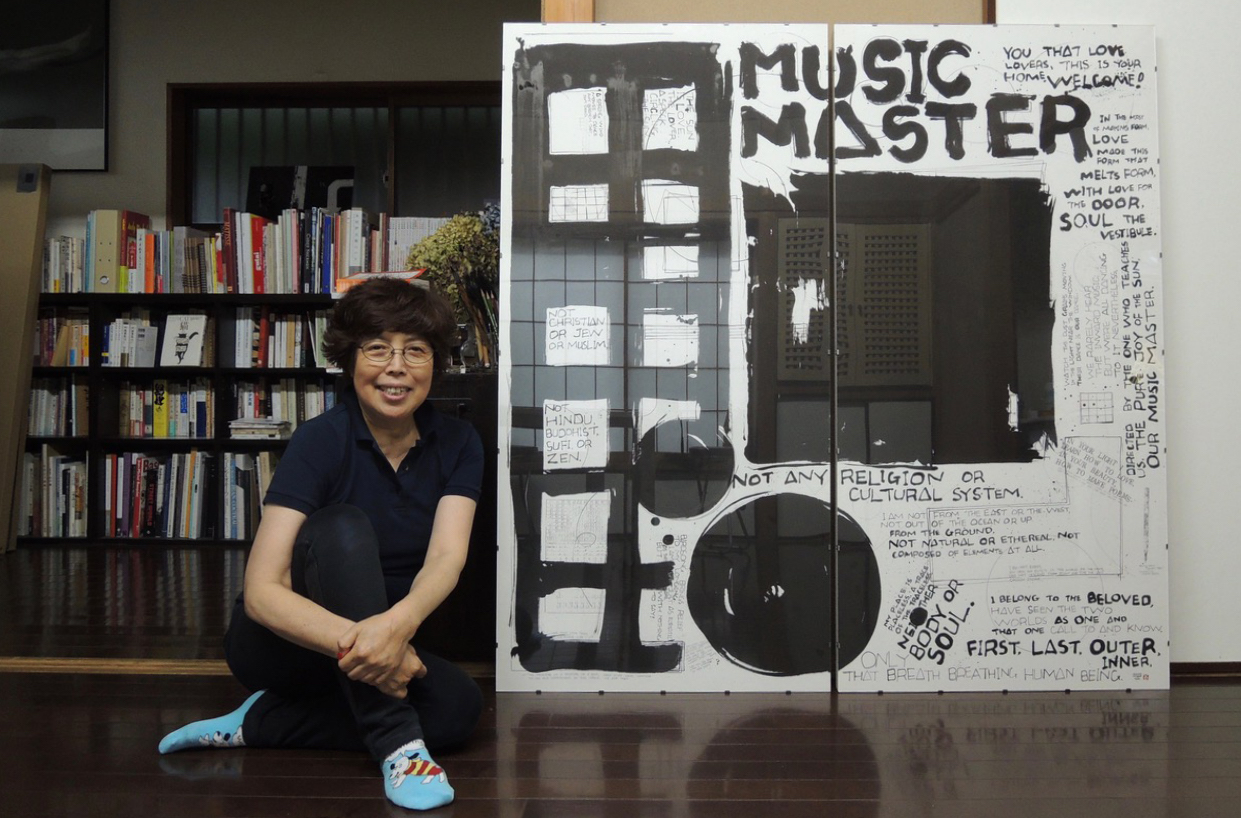 Japanese artist Mizuho Koyama’s (b.1949) recent drawings from her series Sumi Works (2008-present), in ink, crayons and charcoal on paper, turns our attention towards calligraphy’s validity as a form of drawing and its power in reconciliating distinct styles and politics between East and West within a year marked by division and unprecedented attacks to the democratic system in both Japan and USA.

In Koyama, we encounter an artist whose career centres around the creation and developing of her own style leading to her work’s current singularity and maturity, a radical contemporary calligraphy, what she terms as ‘calli-graphiti’. For each of her works, both theme and composition are never left to chance and follow a specific calculus streaming from letters, words or texts such as in her work’s series Gennji Monogatari and ALICE, inspired by Murasaki Shikibu’s ‘Tale of Genji’ and Lewis Carroll’s ‘Alice’s adventures in the wonderland’.

In Sumi Works we find a mixture of opposites between the usage of a contemporaneity take of ‘Shosouin’, a traditional Japanese calligraphy ‘which prohibits artists from straying from the rules’, but where the artist herself has reformulated it to encompass a wider audience by seeking ideas from Anglo-Saxon poetry as opposed to the traditional Japanese, and American’s abstract expressionism and graffiti art who bring forth more automated expressive compositions dictated by a specific moment/feeling in time which liberated the artist from her own rigid education.

As base tonalities used around the world, Koyama’s predominant use of black and white derives from her desire to open up her work’s dialogues to as many audiences as possible, beyond the borders of nationality, religion and historical periods. Her drawings go from simple compositions of collaged letters or written sentences with a singular line that forms an oval shape to heavier compositions where bulks of black ink create depth and form shapes that overshadow past layers of collage and letterings, influenced by the forms, tonalities, gestures and compositions by Franz Kline, Jean-Michel Basquiat as well as Kimiyo Mishima and Joseph Cornell (in her box works).